The transportation system we are used to live with for a 100 years is about to paradigma change at the moment. The new paradigm called Transport as a Service (TaaS), means that instead of using the car like today, but, as with existing ride-hailing or car-sharing services, vehicles will be booked or hailed through an app. But not only personal transportation but also cargo transportation is changing significantly. The leading technology behind this is the software driven autonomous systems, which has been come to intelligent enough to start replacing the human driver or operator. According to the report of Frost & Sullivan (F&S Autonomous Driving & Connected Mobility) the future of the automotive ecosystem is heading toward the integration of multiple domains, such as the Internet of Things (IoT), connected vehicles, autonomous vehicles, and V2X communication. The integration and shift in focus will make software-defined cars to be the essence of connected cars in future. Moreover, as the ecosystem expands, the market would notice extreme competition from both proprietary and open source solution providers.

The self- driving cars depict the most significant advancement in the history of engineering. In 2011, more than 30,000 people died on the roads of the European union and for every death there are four permanently disabling injuries [Reference]. While the EU is committed to increase the safety on roads through various means, self driving cars can reduce or even eliminate the accidents from the roads. Another big change going on in transportation and autonomous systems is about drones. Nowadays, drones are considered an emerging market; their utilities are growing almost daily, providing new education and business opportunities.

At the moment due to growing sales of drones and other remote controlled, semi-autonomous or fully autonomous systems the modern society is facing with the following main challenges in the same way it did at the beginning of automobile era early XX century:

Thereby we see an obvious need for wide availability of comprehensive information sources (study material) about drones not only for the professionals but also for the general audience.

Recent technology trends have opened several new horizons of practical applications of autonomous systems including autonomous / self-driving cars and drones. Several companies have already demonstrated their current capabilities like well-known Tesla Inc., Amazon, DHL, AliExpress, and many more have announced their vision of the near future applications. Regardless of particular technology anticipated there is a common background comprise both technology and legislation that are limiting and guiding the proper use of the selected technologies. This Intellectual output focuses on the common background knowledge needed to be successful in several – currently the most promising domains of autonomous systems.

The output "Autonomous systems module – teaching material” is a 3 – course module covering the theoretical background of the relevant technologies and legislation that represents current legislation in partner countries and EU in general. The actual content of the IO comprises – study material (electronic and electronic-printable), a visual material in the form of video lectures for the key topics and self-tests based on previous experience of the project partners, thereby enabling to prepare the learner for smart use of the technology. 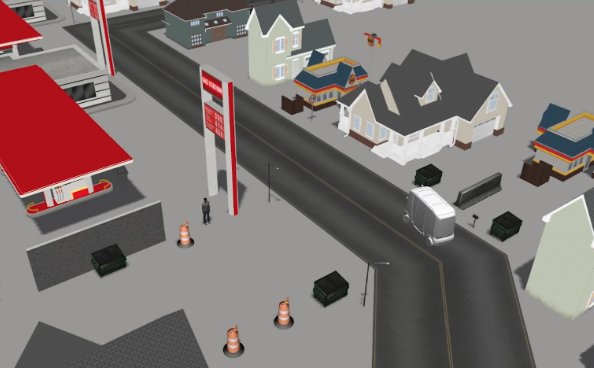 The output “Self-driving vehicles simulation models” is a set of virtual vehicles in logical situations with open-ended problem descriptions and simulation software models.

The intellectual output also includes technical documentation and guidelines how to implement the models in the educational environment.

A hands-on learning platform is essential in teaching students of various levels. By experimenting with real-life vehicles, students can find nuances that could not be tested in the simulation. Also for students of younger age real-life systems are usually more fascinating than virtual ones.

The output “Electric vehicle (EV) study platform” is a physical vehicle designed for teaching autonomous control to VET students. The intellectual output includes mechanical drawings, Bill Of Materials, electrical wiring diagrams and guide for constructing and implementing the platform to ROS system. All outputs will be published for free, so any interested party can download them and build its own autonomous vehicle study platform. A comprehensive guide to the drone technology, preliminarily designated for VET.

Drones become more and more popular, yet the comprehensive guide on how to choose appropriate drone, how to operate it, service it and build is still absent. There are proprietary guides provided by drone manufacturers, yet they usually present a small range of information tailored to the manufacturer’s product range. Once drone becomes something more than just a toy, and particularly when its weight is increased to some kilograms or even dozen of them, it becomes possibly a dangerous tool. Sharing of the airspace with other users (i.e. airliners, balloons, skydivers) requires from the operator's comprehensive knowledge on the construction of the airspace as recognized by international organizations (i.e. ICAO) and following strict guidelines and rules. Operators should be aware of those regulations and also should understand their limitations even considering physiology and emotional state, similar way commercial pilots do. O4 presents a specific approach to the autonomous flying systems (Unmanned Aerial Objects/Vehicles). It also corresponds with O1 where common parts for all autonomous systems are covered, extending and supplying specific information that does not apply, i.e. to the ground vehicles.